The hen harrier is a bird of prey which was once famous for predating fowl, giving the species its name. They are the one of the most endangered species of raptor in the UK. Males and females both have a white patch on their lower backs, but this is the only similarity. Males are pale grey, with slender wings that are tipped with black feathers. Females are mainly brown, with heavily streaked body, tail and wings, which are usually black or white. Juvenile hen harriers are bare similar colours and markings as the females. When a hen harrier spreads it wings you will see 5 distinct and separate tips also referred to as ‘fingers’.

Hen harriers are raptors (birds of prey), meaning they primarily feed on vertebrates. They will hunt their prey by slowly flying low over an area, dividing it onto quarters and listening for prey. They feed primarily on small birds and mammals but can adapt to insects, reptiles and amphibians when other prey is not available. Hen harriers often hunt on grouse moors meaning young grouse are often a crucial part of their diet. Juvenile hen harriers roam widely in their adolescent years before settling in one spot to breed.

According to the Birds of Conservation Concern 4 (2015) the Hen Harrier is classified as RED status. There is evidence that the numbers of hen harriers in Scotland and the UK more generally have been declining in recent decades. 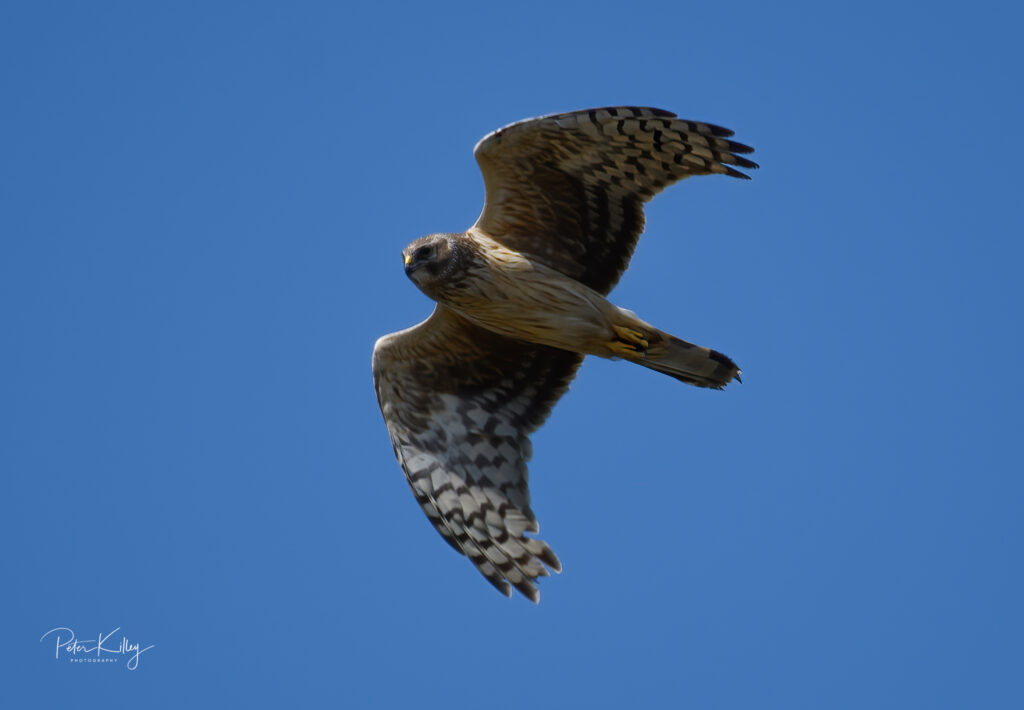 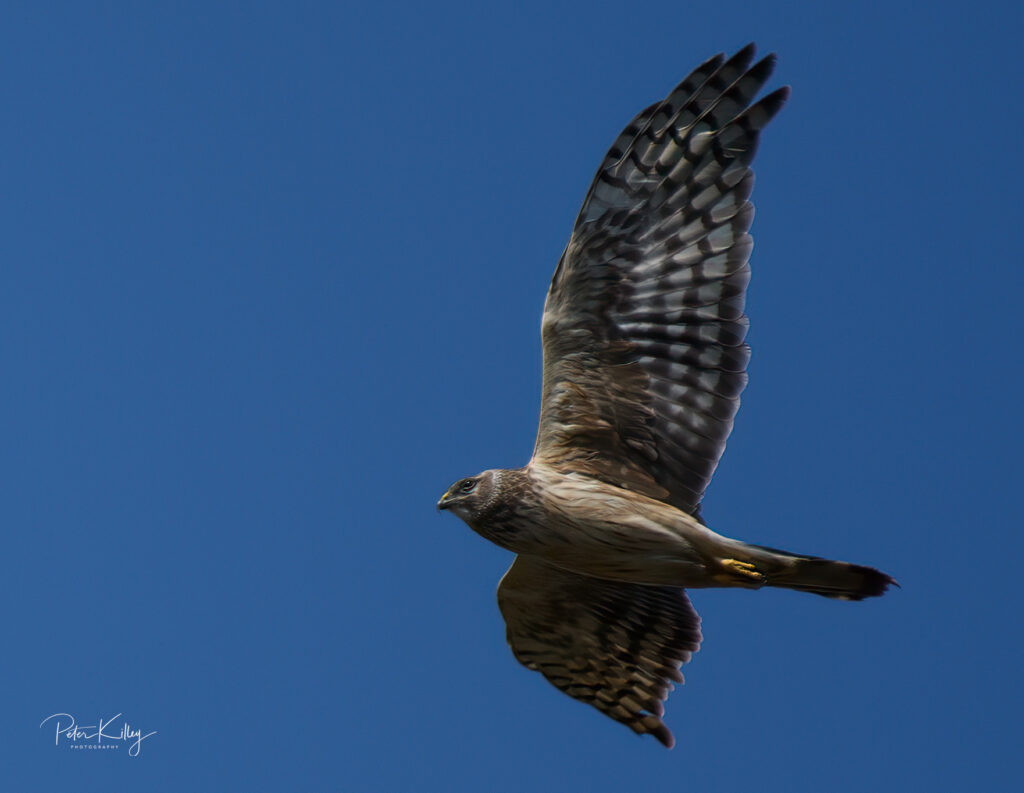 Flying balls of fluff is what they are sometimes referred to as.

Long-tailed tits are very small birds, typically less than half the weight of a robin. They have a fluffy pale-pinkish breast, dark wings, a short beak and, of course, a long tail.

Despite their name, long-tailed tits are not closely related to the tit family (Paridae), which includes the blue tit, great tit and others.

Long-tailed tits mainly feed on insects and invertebrates. The eggs of moths and butterflies are commonly taken, as are caterpillars.

The birds pluck their prey from tree branches and other vegetation. Seeds may be eaten in winter when food is scarce and they will often visit bird feeders.

Long-tailed tits build a nest made from moss, lichen, feathers and spider silk. Six to eight eggs are normally laid in April and will hatch after up to three weeks. The chicks fledge after around two weeks in the nest. 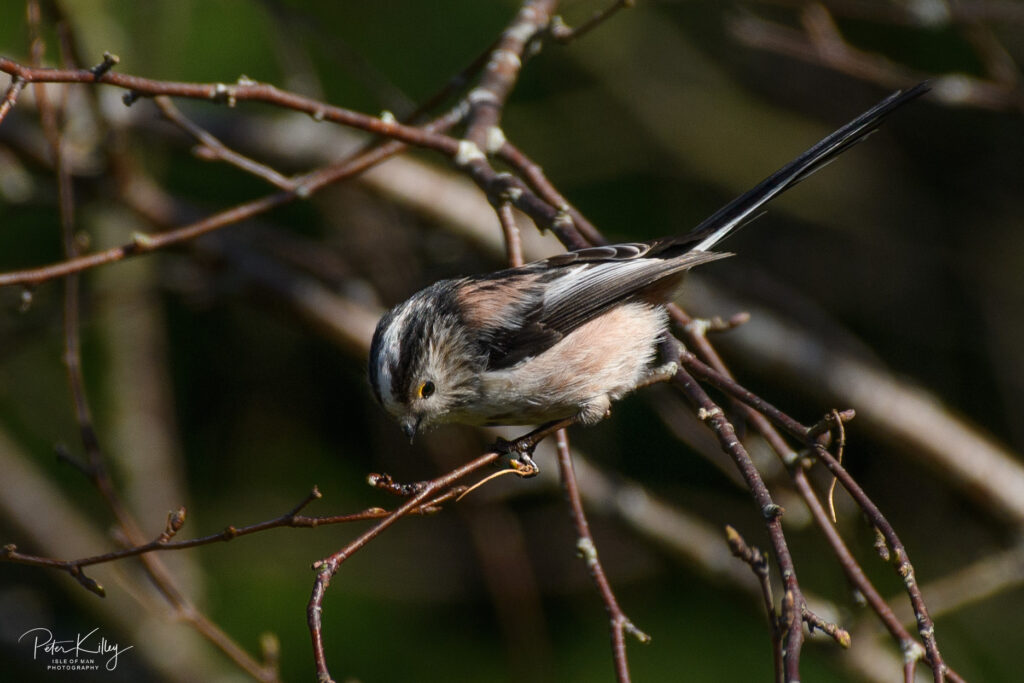 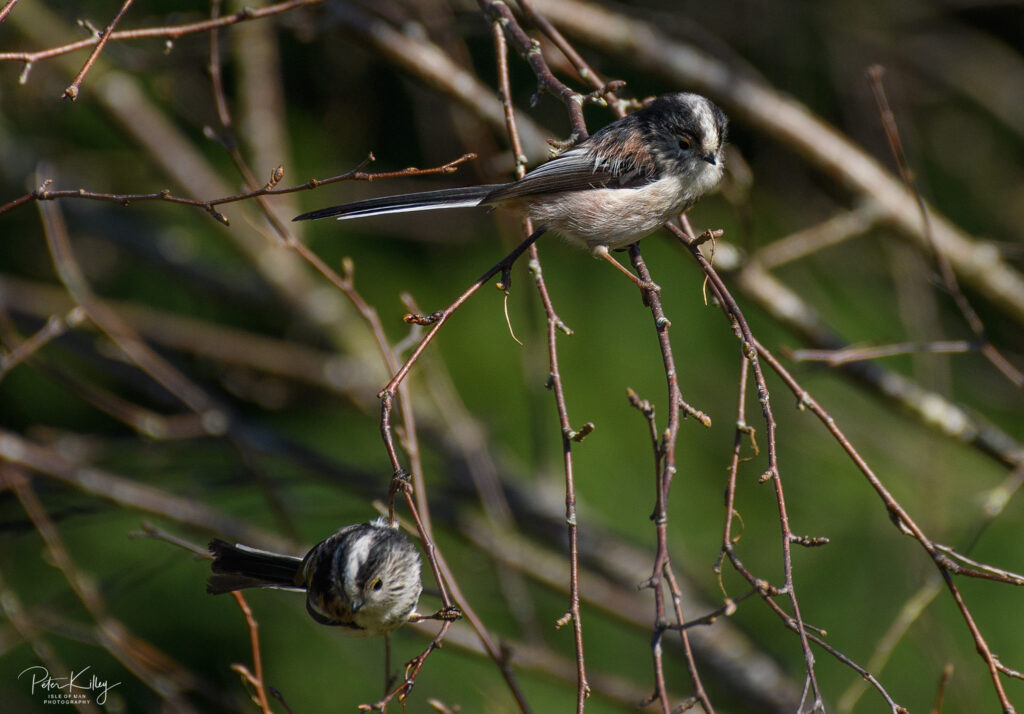 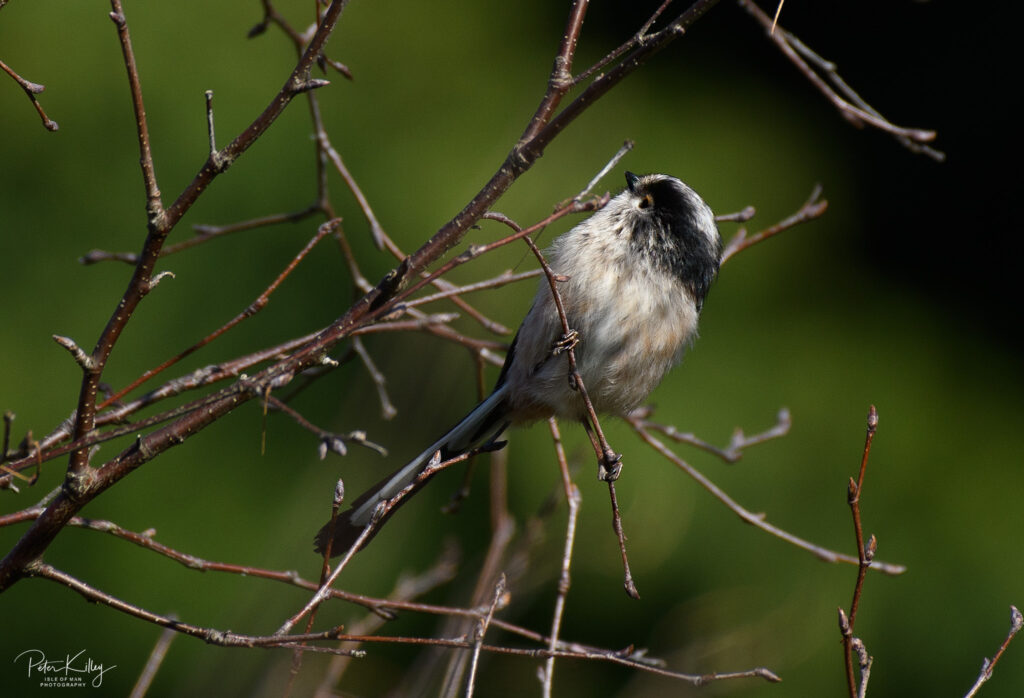 The Isle of Man has at present a healthy population of Peregrine Falcons.

Peregrine Falcons are classed as schedule 1 Birds which are specially protected from intentional and reckless disturbance when nesting.

The peregrine is a large and powerful falcon. It has long, broad, pointed wings and a relatively short tail. It is blue-grey above, with a blackish top of the head and an obvious black ‘moustache’ that contrasts with its white face. Its breast is finely barred. It is swift and agile in flight, chasing prey.

Peregrine falcons are the undisputed fastest animal on Earth. Their body shape and wing posture helps them to fly in whats called a ‘stoop’ at break-neck speeds. They can stoop at over 320 km/h (200 mph) by diving from a great height.

They can be seen in cities and towns worldwide. Tall buildings and church spires on the Isle of Man resemble their natural cliff habitat and the abundance of pigeon prey make towns a key peregrine habitat.

The female normally lays a clutch of three or four eggs in late March or April at 2-3 day intervals.

The nest site, known as an eyrie, is usually on a grassy or earthen cliff-ledge, quarry or other inaccessible undisturbed location. Buildings and other constructions are increasingly being used. Old nests of other species such as ravens are used elsewhere in the world, but rarely in the UK.

The nest itself is a slight scrape in earth or old debris on the nest ledge. No material is brought in to build a nest. The female forms the scrape using her chest and legs. 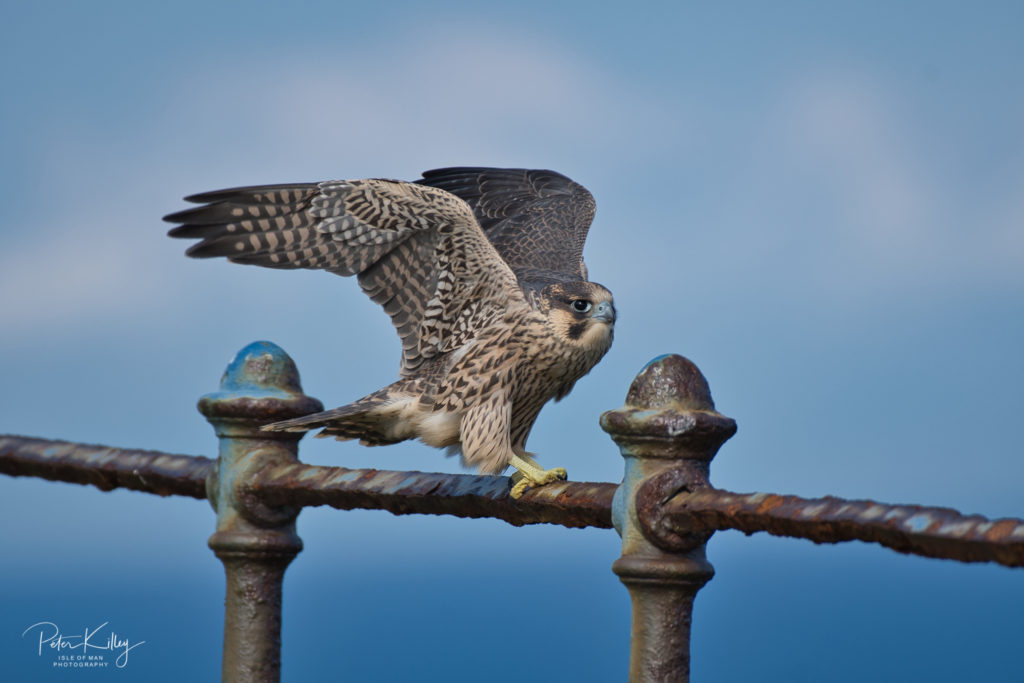 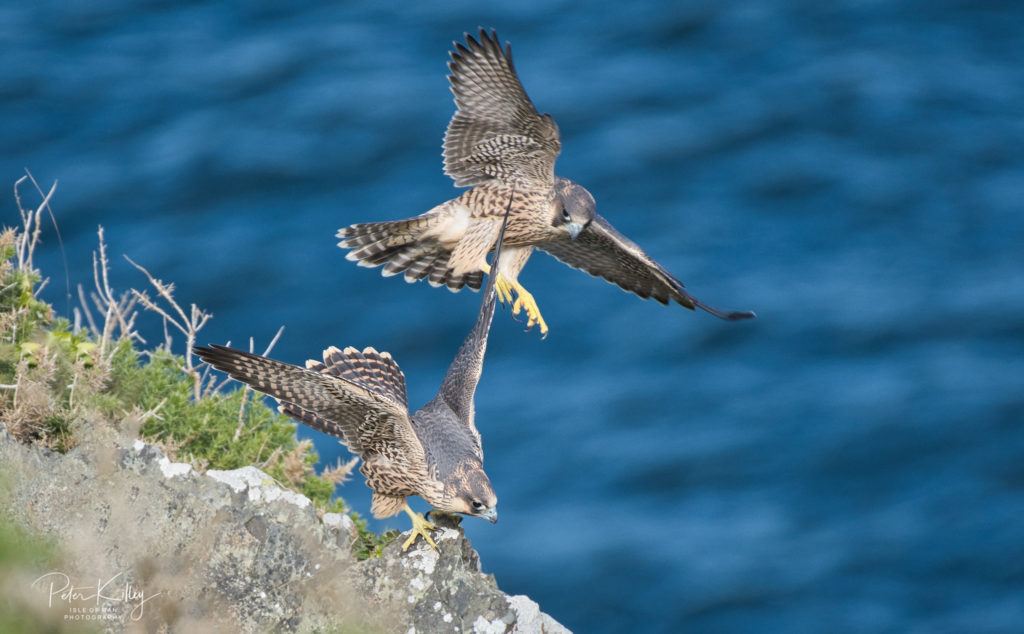 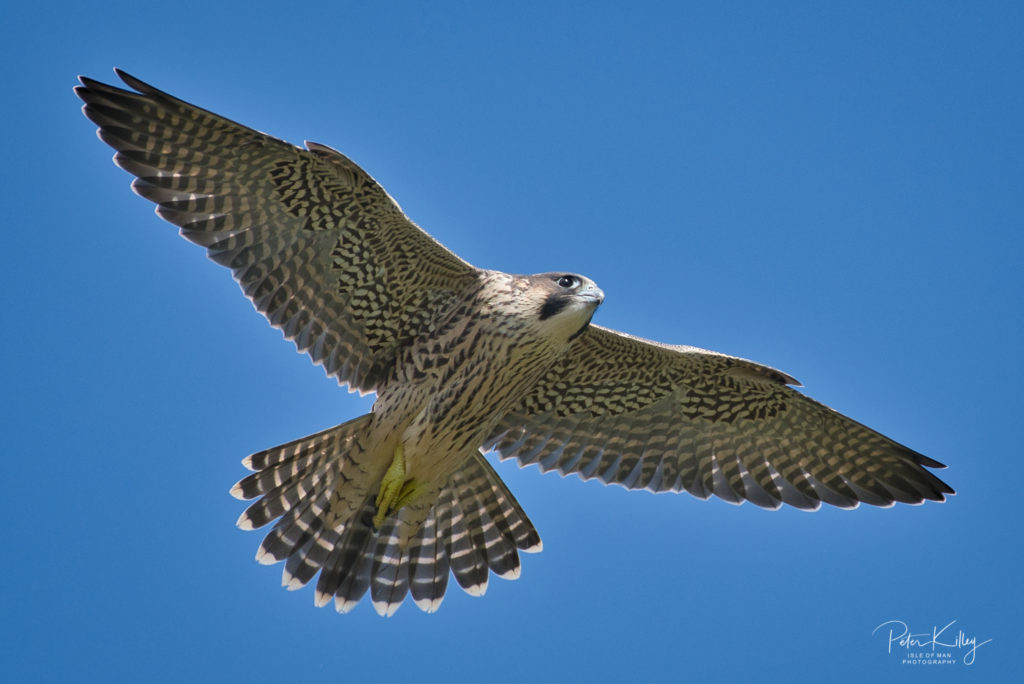 Swallows are dark blue with a cream underside. Their characteristic tail has two distinctive streamers when in flight, and they have long blue-black wings which appear curved and slender when perched. They have a dark throat and forehead (more of a rusty-buff colour in juveniles) and a blue-black nape and crown.

Not to be confused with: swifts, house martins and sand martins.

Swallows feed on flies and aphids, which they catch as they fly. They drink by skimming low over lakes or rivers and scooping up water with their open beaks.

The swallow is a summer visitor to the UK and Isle of Man and one of the latest to leave after breeding. They arrive in April, and most depart by late September, crossing the Sahara desert to reach their wintering grounds in southern Africa.

Look out for swallows throughout the summer as they fly overhead, or bring food to nests beneath eaves. Their chattering call helps distinguish them from screaming swifts when in flight. As autumn approaches, groups of swallows will also congregate at roosting sites such as reed beds. 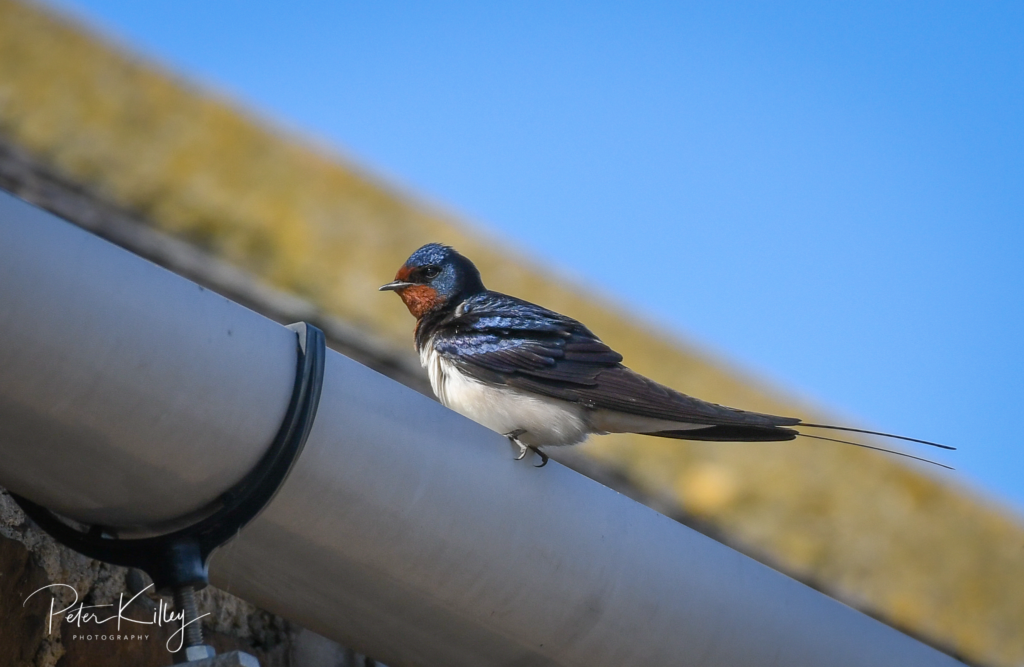 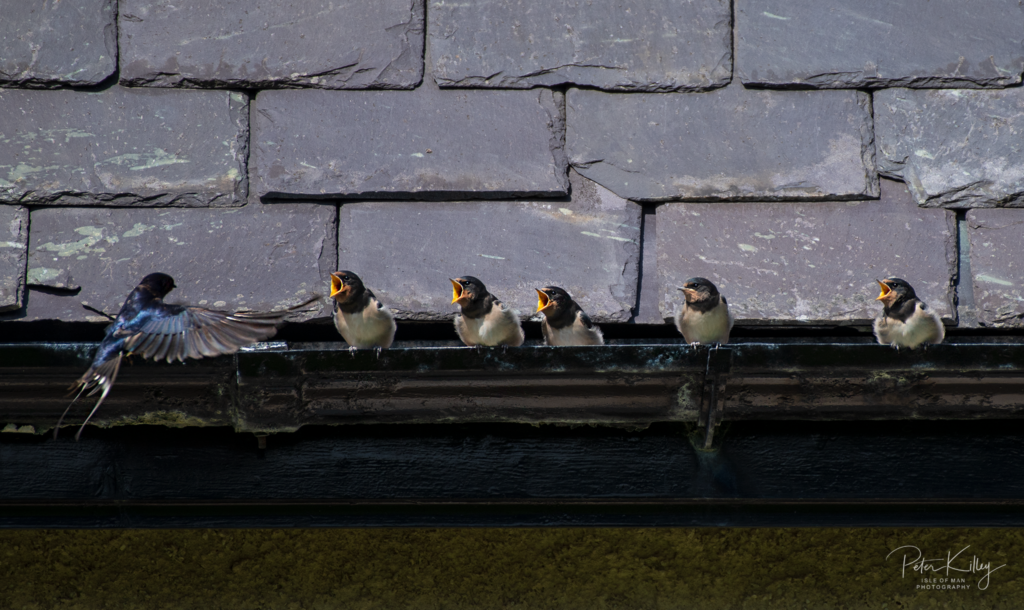 A sign of winter arriving on the Island with a small number of these beautiful Snow Buntings seen here at the Point of Ayre early December.

Globally, they breed around the Arctic from Scandinavia to Alaska, Canada and Greenland and migrate south in winter. They are a scarce breeding species in the UK and in Scotland, making them an Amber List species. They are more widespread in winter in the north and east when residents are joined by other continental birds. See more of my Isle of Man Wildlife images by clicking HERE 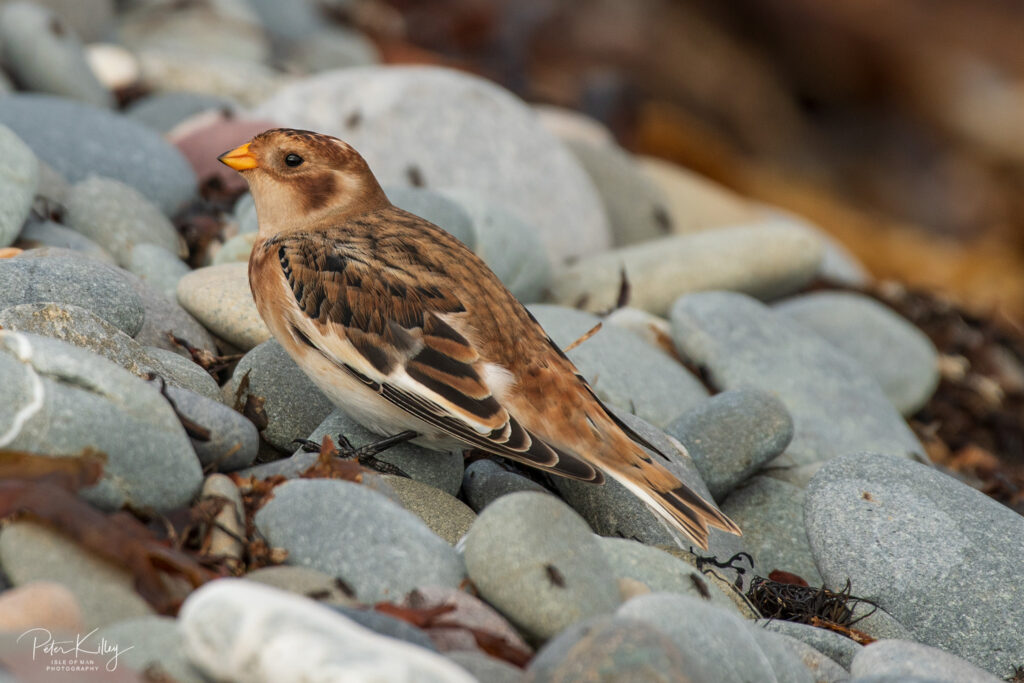