St Lukes Church in West Baldwin was formerly attached to the parish church of Kirk Braddan and now Marown, the church was built in 1836 on the site of a Celtic church called “Keeill Abban”, an ancient Celtic cross has also been built into the west gable section of the building which was also used as a school up to 1871.

Behind this chapel and up the hill is the ancient site of *Tynwald which was held there as far back as 1429 and is now marked by a circle of stones. 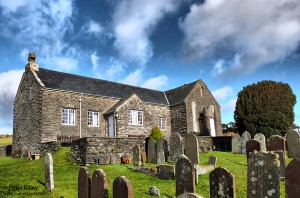