Seven crewmen lost their lives on 11th January 2000 when their vessel – the scallop dredger Solway Harvester – sank off the East coast of the Isle of Man.

The men were all from the Isle of Whithorn area of Dumfries and Galloway.

Through my work I remember that day so well and the subsequent involvement that my work had in the recovery of the vessel and the men on the night they were brought back onto Victoria Pier.

I must say though that my respect and credit goes to Police Inspector Dudley Butt who conducted the whole inquiry from start to finish and was regularly producing press releases along with supporting family members during this terrible period.

I took this image today (11th January 2012) twelve years to the day that this stricken vessel was lost. 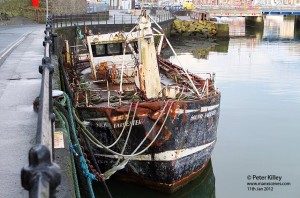