Close to the Wetlands and St Peters church in Onchan is Molly Carrooins cottage which was in fact not built as a cottage but as a weaving shed which was converted to a cottage around 1800 when a chimney stack was added to the outside of the gable wall, it then later became the home of the village washerwoman.

This tiny-whitewashed cottage, which is probably one of the oldest buildings in the village, has now been fully restored to give a taste of true village tradition, and is sometimes open to the public.

A big thank you to Architectural Historian and Captain of Onchan Parish, Mr Peter Kelly for all his continued advice and support with Manxscenes.com. 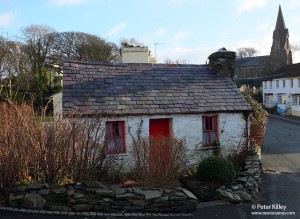