I took this image on the 2nd July 2011, the image shows the beginning of the demolition of the rear side of the once grande hotel which gracefully overlooked the northern part of Ramsey Bay.

The hotel, which first opened in 1897 as the Ramsey Hydro, closed its doors for the last time in February 2009, click here for an image that I took of the front of the hotel in September 2004 – (click below image for larger view).

I will ensure that a picture of the replacement hotel is added to the site when it happens! 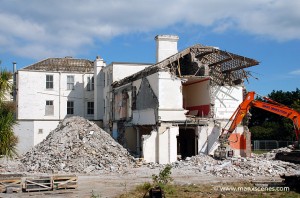