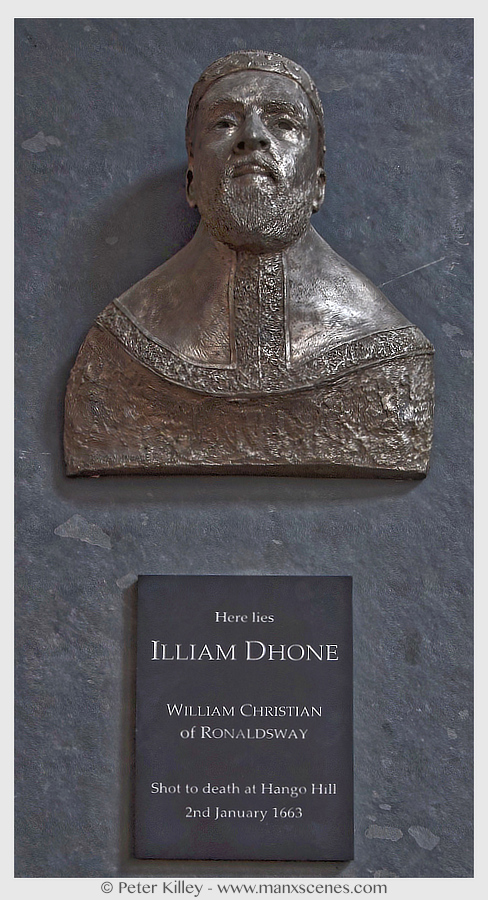 Inside Malew Church is this wonderful sculpture of the Manx Martyr William Christian better known as Illiam Dhone which was sculptured by Manxman Bryan Kneale. William Christian, known in Manx as Illiam Dhone (Brown William), was considered a traitor by the Stanleys but a patriot by many of the Manx for his actions in surrendering the Island to the Parliamentary troops during the Civil War. At his trial many members of the House of Keys were unwilling to condemn him and as a result were removed and replaced by others who would find William Christian guilty. By October 1651 the Island was besieged by Parliamentary forces who demanded that the Manx surrender. Stanley had been captured in England. His wife, Countess Charlotte de la Tremouille, tried to negotiate for her husband’s release but when she learnt of her husband’s execution and that the Island’s garrisons were to be surrendered by William Christian (the Island’s Receiver General), she finally admitted defeat. The Manx Rebellion, as it was known, was a bloodless coup with English Parliamentary forces taking over administration of the Island. The Keys, which after 1600 had been a permanent representative body, continued to meet periodically during this time. When King Charles II was restored to the throne in 1660 and the 8th Earl of Stanley returned to the Island, the Earl accused William Christian of treason for the surrendering the Island in 1651 and had him executed by firing squad at Hango Hill, outside Castletown, on January 2nd 1663, despite the issue of a general pardon granted by Charles II. Feel free to make any comments either on this website by clicking the “Write comment” below or by logging onto my Facebook Page enjoy – Click on the image for a larger view.

This sculpture of Manx Martyr Illiam Dhone (also known as William Christian) is displayed in Malew Parish Church and the plaque underneath the sculpture simply states “Here lies Illiam Dhone, William Christian of Ronaldsway, shot to death at Hango Hill on 2nd January 1663” – January 2nd 2013 marks the 350th anniversary of his execution. The image was captured on my Nikon S8200 Camera resized and cropped in Adobe Photoshop CS6. Feel free to make any comments either on this website by clicking the “Write comment” below or by logging onto my Facebook Page – Click on the image for a larger view.