It’s hard to go wrong with a breed that was the favorite of James Herriot. Developed in northern England, the Border Terrier was used to hunt foxes that preyed on farmers’ livestock. It became a favorite hunt terrier, working with packs of Border Foxhounds. Hunt masters are credited with standardizing breed type and getting this hardy, working terrier recognized as a purebred by England’s Kennel Club. A sturdy, natural-looking terrier, males weigh about 14 pounds, females slightly less. The breed’s hallmarks are the head and expression, which resemble that of the otter. The coat is short, dense and harsh in shades of red, grizzle and tan, blue and tan, or wheaten, and may be kept neat by raking weekly with a stripping knife. While the Border adapts well to either city or country, it needs vigorous daily exercise to stay fit and content. Terriers like to push behavior boundaries, so present firm, consistent rules. This breed enjoys children and is, like most terriers, an excellent watchdog.

Click on any of the images for a larger view of  Ted, both images were captured in late March 2012. 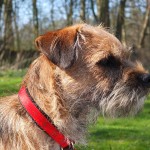 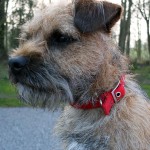