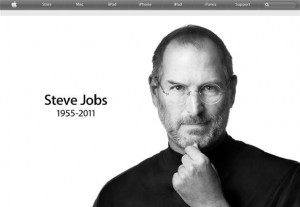 Steve Jobs, billionaire co-founder of Apple and the mastermind behind an empire of products that revolutionised computing, telephony and the music industry, has died in California at the age of 56.

Jobs stepped down in August as chief executive of the company he helped set up in 1976, citing illness. He had been battling an unusual form of pancreatic cancer, and had received a liver transplant in 2009.

Jobs wrote in his letter of resignation: “I have always said if there ever came a day when I could no longer meet my duties and expectations as Apple’s CEO, I would be the first to let you know. Unfortunately, that day has come.”

Apple released a statement paying tribute: “Steve’s brilliance, passion and energy were the source of countless innovations that enrich and improve all of our lives … The world is immeasurably better because of Steve.”

Bill Gates, the former chief executive of Microsoft, said in a statement that he was “truly saddened to learn of Steve Jobs’s death”. He added: “The world rarely sees someone who has had the profound impact Steve has had, the effects of which will be felt for many generations to come.

“For those of us lucky enough to get to work with him, it’s been an insanely great honour. I will miss Steve immensely.”

He is survived by his wife, Laurene, and four children. In a statement his family said Jobs “died peacefully today surrounded by his family … We know many of you will mourn with us, and we ask that you respect our privacy during our time of grief”.

Jobs was one of the pioneers of Silicon Valley and helped establish the region’s claim as the global centre of technology. He founded Apple with his childhood friend Steve Wozniak, and the two marketed what was considered the world’s first personal computer, the Apple II.

He was ousted in a bitter boardroom battle in 1985, a move that he later claimed was the best thing that could have happened to him. Jobs went on to buy Pixar, the company behind some of the biggest animated hits in cinema history including Toy Story, Cars and Finding Nemo.

He returned to Apple 11 years later when it was being written off by rivals. What followed was one of the most remarkable comebacks in business history.

Apple was briefly the most valuable company in the world earlier this year, knocking oil giant Exxon Mobil off the top spot. The company produces $65.2bn a year in revenue compared with $7.1bn in its business year ending September 1997.

Then came the success of the iPod, which revolutionised the music industry, leading to a collapse in CD sales and making Jobs one of the most powerful voices in an industry he loved.

His firm was named in homage to the Beatles’ record label, Apple. But the borrowing was permitted on the basis that the computing firm would stay out of music. After the success of the iPod the two Apples became engaged in a lengthy legal battle which finally ended last year when the Beatles allowed iTunes to start selling their back catalogue.

Jobs’s remarkable capacity to spot what people wanted next came without the aid of market research or focus groups.

“For something this complicated, it’s really hard to design products by focus groups,” he once said. “A lot of times, people don’t know what they want until you show it to them.”

Jobs leaves an estimated $8.3bn, but he often dismissed others’ interest in his wealth. “Being the richest man in the cemetery doesn’t matter to me … Going to bed at night saying we’ve done something wonderful … that’s what matters to me.”