SOME BASIC FACTS ABOUT 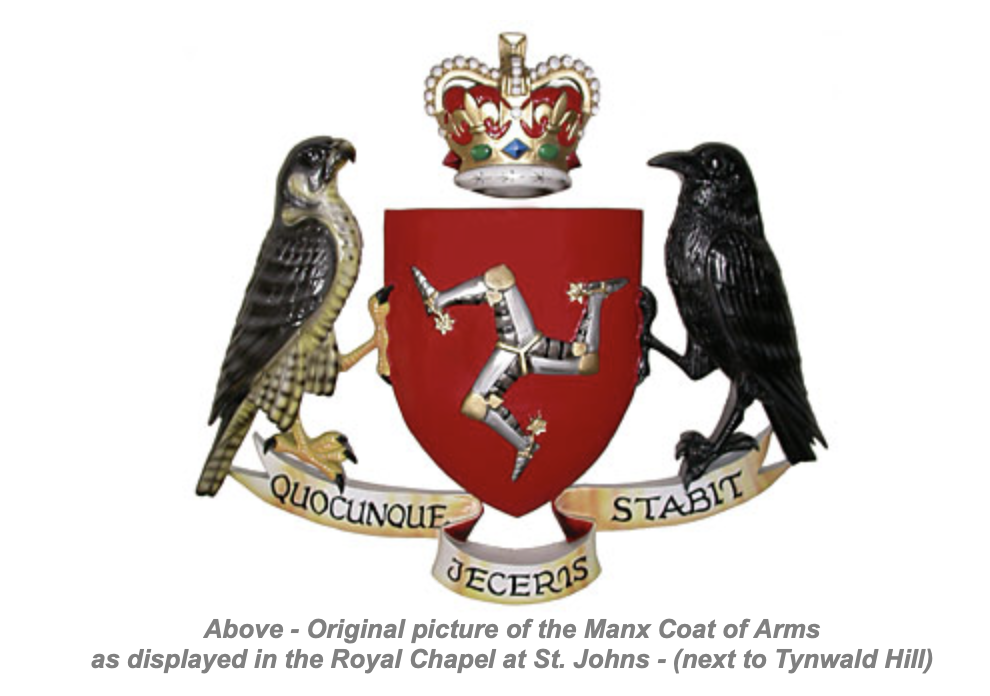 Above – Original picture of the Manx Coat of Arms
as displayed in the Royal Chapel at St. Johns – (next to Tynwald Hill)
Isle of Man Capital: Douglas
Approximate Population: 85,000
Land Area: 572 sq. km/ 227 square miles
Location: The centre of the Irish Sea – 50 km (31 miles) from Ireland and 50 km (31 miles) from the U.K.
Longest River: Sulby (17 km/ 10.5 miles)
Highest Peak: Snaefell Mountain (Snow Mountain) (621 m/ 2036 feet)
Head of State: Her Majesty the Queen
Her Majesty the Queens Personal Representative: Lieutenant Governor Sir John Lorimer who is the Islands 31st Crown representative for the Island
Status: An internally self-governing dependent territory of the Crown which is not part of the United Kingdom
Parliament: Tynwald
Currency: Manx pounds and pence (equivalent to GB pounds)
Languages: English and Manx Gaelic

The Coat Of Arms (as seen above)
The Coat of Arms of the Isle of Man were granted by Her Majesty by Royal Warrant dated 12th July 1996. The Arms are an augmented version of the traditional arms which comprise the Three Legs conjoined on a red shield surmounted by a Crown and with the motto Quocunque Jeceris Stabit underneath. In heraldic terms the Arms are described:

“For the Arms: Gules a Triskele Argent garnished and spurred Or And for the Crest ensigning the Shield of Arms An Imperial Crown proper and for the Supporters Dexter a Peregrine Falcon and sinister a Raven both proper together with this Motto Quocunque Jeceris Stabit.”

The Peregrine Falcon (as seen above)
In 1405, King Henry IV gave the Isle of Man with all its rights to Sir John Stanley on condition that he paid homage and gave two falcons to him and to every future King of England on his Coronation Day. Sir John’s descendants ruled as Kings or Lords of Mann for 360 years until George III assumed the Lordship, while the presentation of two falcons continued up to the Coronation of George IV in 1822.

The Raven (as seen above)
The Raven is a bird of legend and superstition and there are a number of places on the Island which include Raven in their names. The Island has a strong Viking element in its history and Odin, the Norse God, was, according to mythology, accompanied by two Ravens. During the Millennium Year of 1979, a replica of a Viking longship was sailed from Norway to the Isle of Man by a mixed Norwegian and Manx crew. The longship, which is now preserved on the Island, is called “Odin’s Raven”.

The Motto (as seen above)
The motto “Quocunque Jeceris Stabit”, which translates literally as “whichever way you throw me, I will stand” continues to feature on the Coat of Arms. This motto has been associated with the Isle of Man since circa 1300. It was, reportedly, in use before this date by the MacLeods of Lewis as ancient Lords of the Isles of Scotland which, after 1266, included the Isle of Man.

The Three Legs of Mann (as seen above)
The three legs symbol seems to have been adopted in the Thirteenth Century as the armorial bearings of the native kings of the Isle of Man, whose dominion also included the Hebrides – the Western Isles of Scotland.

After 1266, when the native dynasty ended and control of the Island passed briefly to the Crown of Scotland and then permanently to the English Crown, the emblem was retained, and among the earliest surviving representations are those of the Manx Sword of State, thought to have been made in the year 1300 AD. The Three Legs also appeared on the Manx coinage of the seventeenth-nineteenth centuries, and are still in everyday use in the Manx Flag.

Why the Three Legs were adopted as the royal arms of the Manx kingdom is unknown. It was originally a symbol of the Sun, the seat of Power and Life. In ancient times the emblem was particularly connected with the island of Sicily (probably because of its triangular outline) but the Sicilian “Legs” were always naked and generally displayed Medusa’s head at the central point.

A rather similar device was popular amongst the Celts and Norsemen in NW Europe, and in view of this it has been suggested that the Manx Three Legs were a heraldic modification of a native badge or emblem. Support for this theory may be seen in the appearance of the ‘triskele’, or simplified “Three Legs” emblem, on coins of the tenth century Norse King, Anlaf Cuaran, whose dominion included Dublin and the Isle of Man; and it is probable that the later Manx Kings were a branch of the same dynasty.

The Ancient Manx Sword of State is carried by the sword bearer before the Queens personal representative to the Isle of Man, the Lieutenant Governor, at each meeting of Tynwald day at St. John’s. The Sword of State dates from not later than the 12th Century. It is traditionally the sword of Olaf Godredson (Olaf II or Olaf the Black), who became King of the Sudreys (Southern Hebrides and Man) in 1226. Together with an army of northern Manx men he successfully routed a challenge to his rule on 14th February in 1228 at Tynwald (considered to be Tynwald Hill, St John’s).

The ceremonial sword is used at the Tynwald Day sitting at St Johns and is carried by the Sword Bearer preceding the Lieutenant Governor in the procession. It also appears when Tynwald sits in the Legislative Chambers in Douglas where a replica of the sword is displayed on non-sitting days.

The sword signifies the duty of the Sovereign, acting through Tynwald, to protect and defend the people from the incursions of their enemies, in peace and in war. Tynwald is not properly constituted and no proceedings can take place without its presence. Members show deference to its authority by standing in their places as the sword is brought in and placed in position prior to commencement of business.

The ancient Manx Sword of State has a two-edged steel blade, 29 inches long, with a hardwood hilt, 9 inches long, which tapers from the guard to the pommel. The guard is a thin steel band, 11 inches across, surmounted where the guard intersects the blade with shields carrying the Three Legs, which also appear on the flattened pommel.