Scarlett Point Tower is situated on the southwest coast of the Isle of Man, in Castletown. The high visibility orange building was formerly used a coastguard look out tower until the early 1970’s and was then decommissioned.

The Tower has been used by radio hams for the last few years however during World War 2, Scarlett Point was used as a radar station.

You can also see to the back right of the image the ‘Herring Tower’ which is situated on Langness Peninsula. 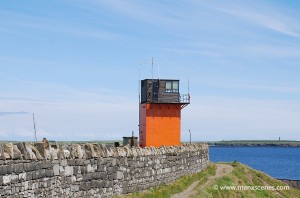